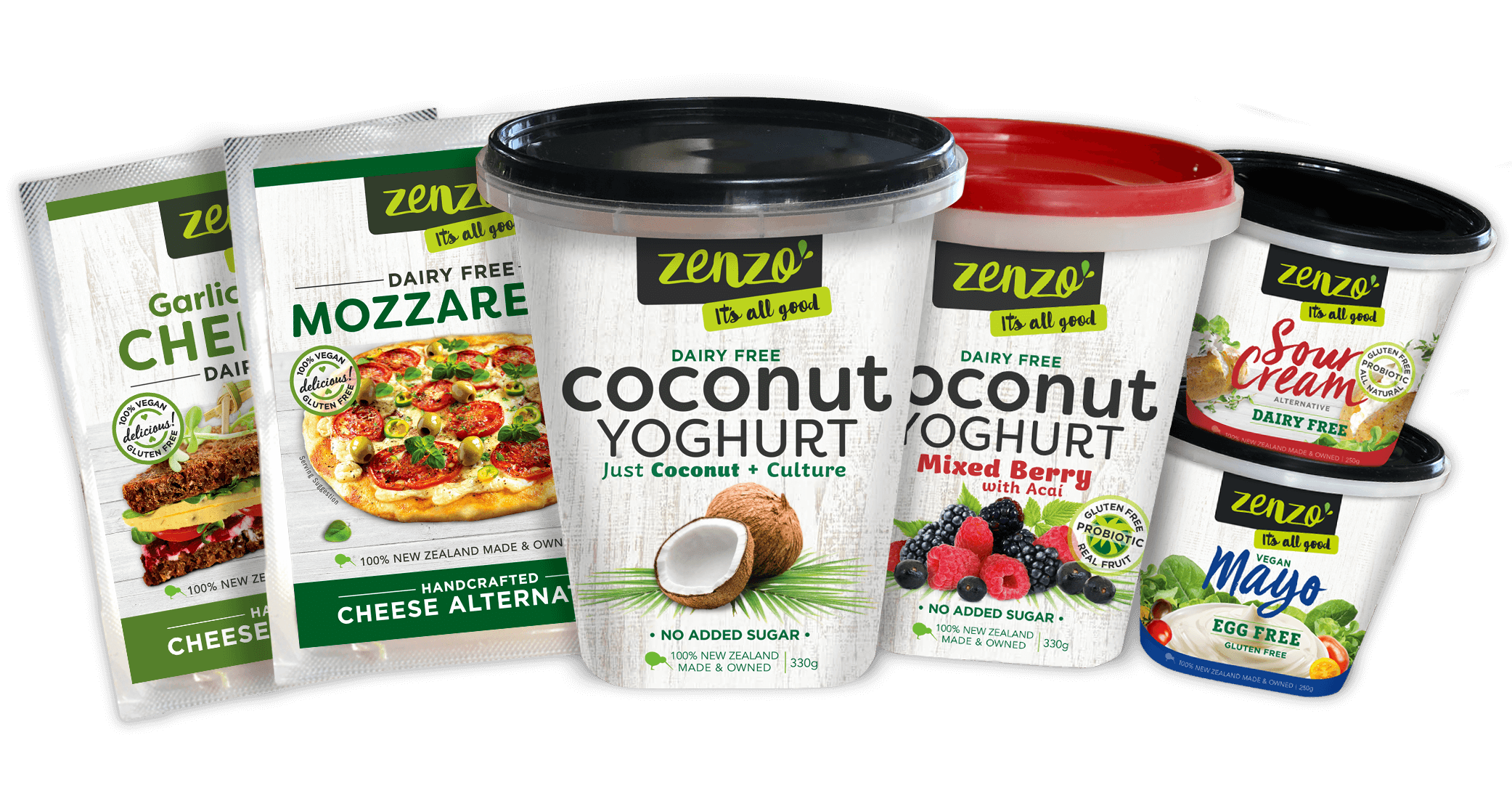 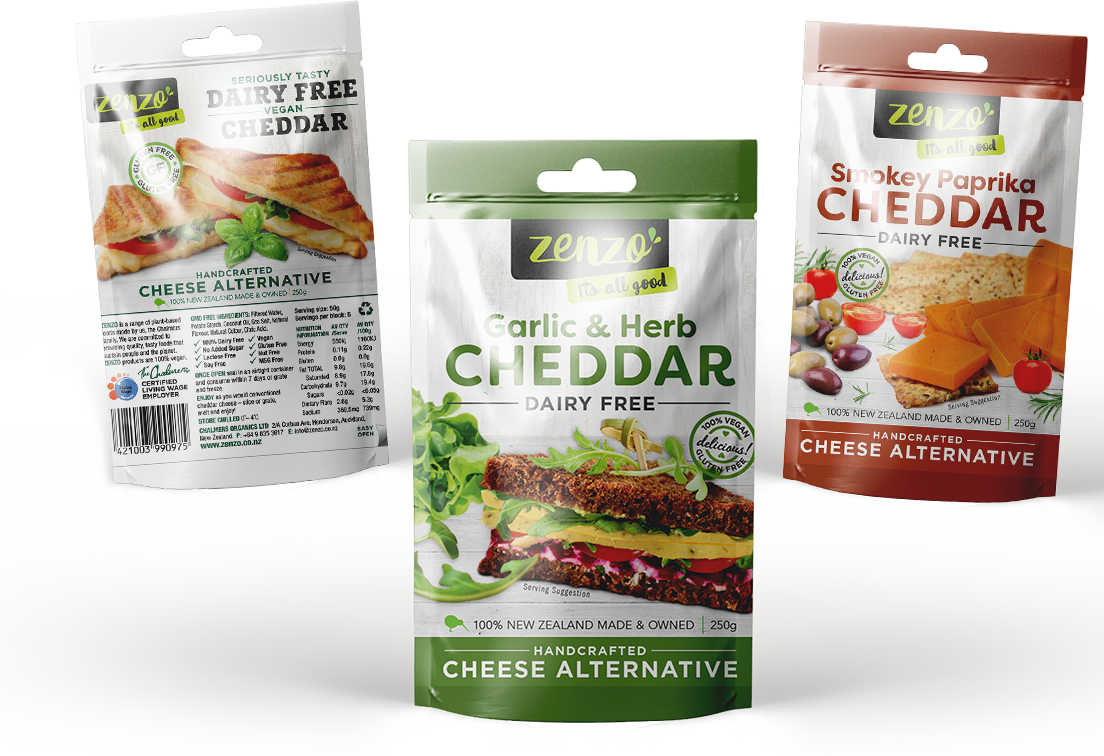 Looking back, it is hard to see where our journey into organic food manufacturing began. Was it when our young son Daniel (then aged 2) had eczema or was it when Stephen’s brother Greg came back from the United Kingdom where he had been working in a macrobiotic restaurant? Suffice it to say, in the 1970’s we did start to look seriously at what we were putting into our bodies and how that affected our health.

By 1978 we were vegetarian but relied very heavily on dairy products, and this is when our baby Daniel started getting very bad eczema. We did not realise how bad it was until we ran out of hydrocortisone cream one weekend and then could see it was much worse than when we had started the treatment. We were then very fortunate to find a new and insightful Doctor (John Hilton) who suggested that we try to stop feeding our baby dairy products and sugar. 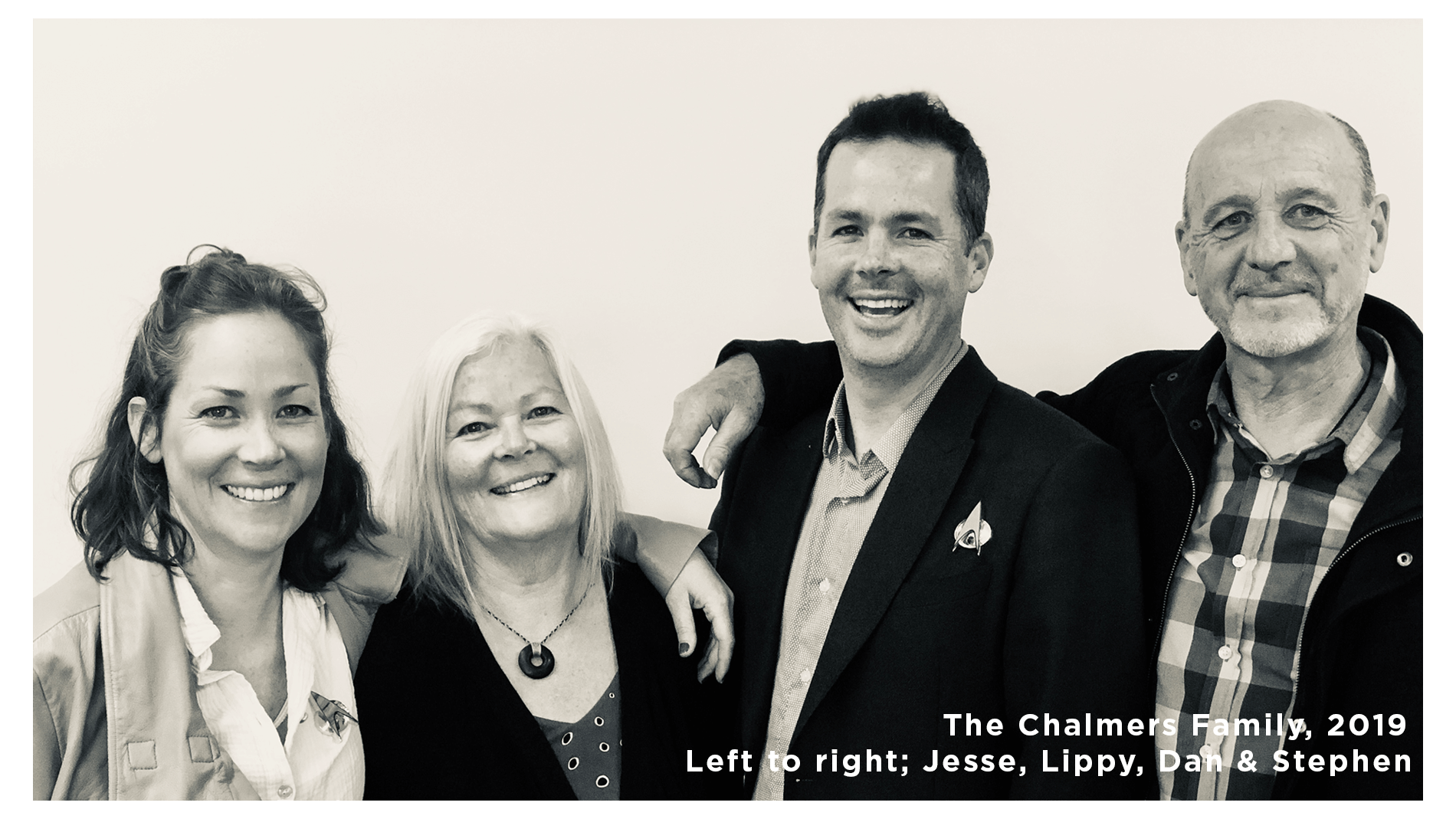 Back in 1978, this was some challenge. The doctor had told us that it would get worse before it got better as his little body had to eliminate before it could heal. We nearly gave up after a month as it had gotten so bad without the cream that we could not bath him at all! However, we persevered and at the end of 3 months on the new diet, his eczema had completely disappeared. This completely sold us on the realization that your food is extremely important and, although we are all different, what you eat has a profound effect on your body.

At about this time Greg came home from London and bought some mysterious foods with him – miso, sea vegetables (wakame and Kombu), tamari, some dried shitake mushrooms and some freeze-dried tofu. His original idea was to start a macrobiotic restaurant but after many, many hours of discussions we decided to open a shop because as I said: “I can’t get the foods I need for my child, so it must be the same for other parents”.

During our search for a site to open a shop we came across a property in Richmond Road Grey Lynn that had been a food co-op, and they had closed. We took over their lease, and Harvest Wholefoods was born. In those days (1980) Grey Lynn was a very run-down area and that end of Richmond Road was very quiet. I think in our first week we took $200! We all had to have other jobs in the evenings and weekends to keep afloat. 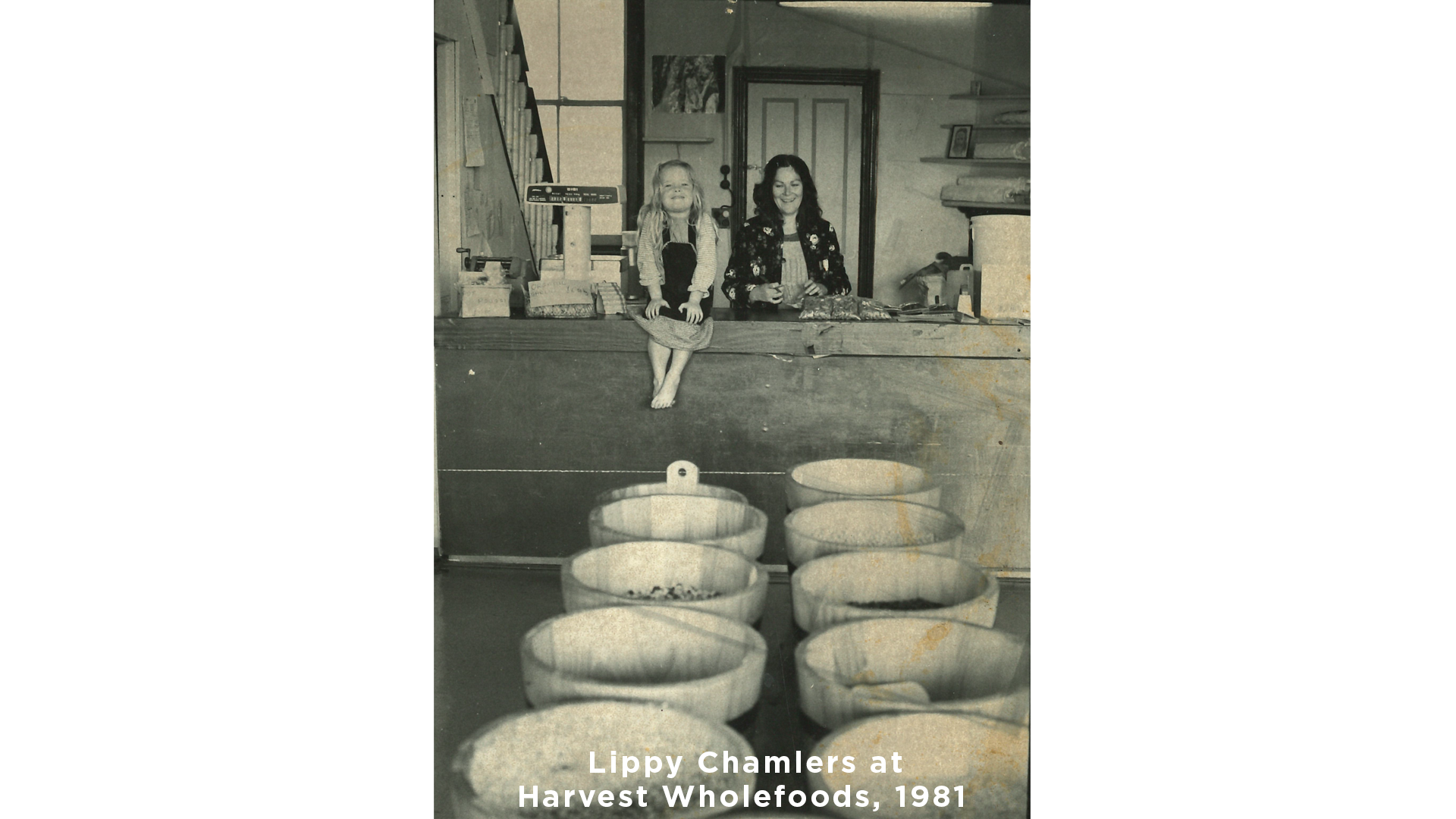 We realised that we needed something unique to bring folk to our shop and as Greg had used tofu so much in the restaurant, we started experimenting at home making it. We eventually converted a room, at the back of Harvest, into a little food processing area and started making tofu. This, of course, solved a lot of problems for us in sourcing good protein for our son as well. Hard to imagine now how difficult it was to make it with only very rudimentary equipment, but we did. We had folk coming from everywhere, as far away as Hamilton, including other shops who wanted us to supply them with tofu as well. 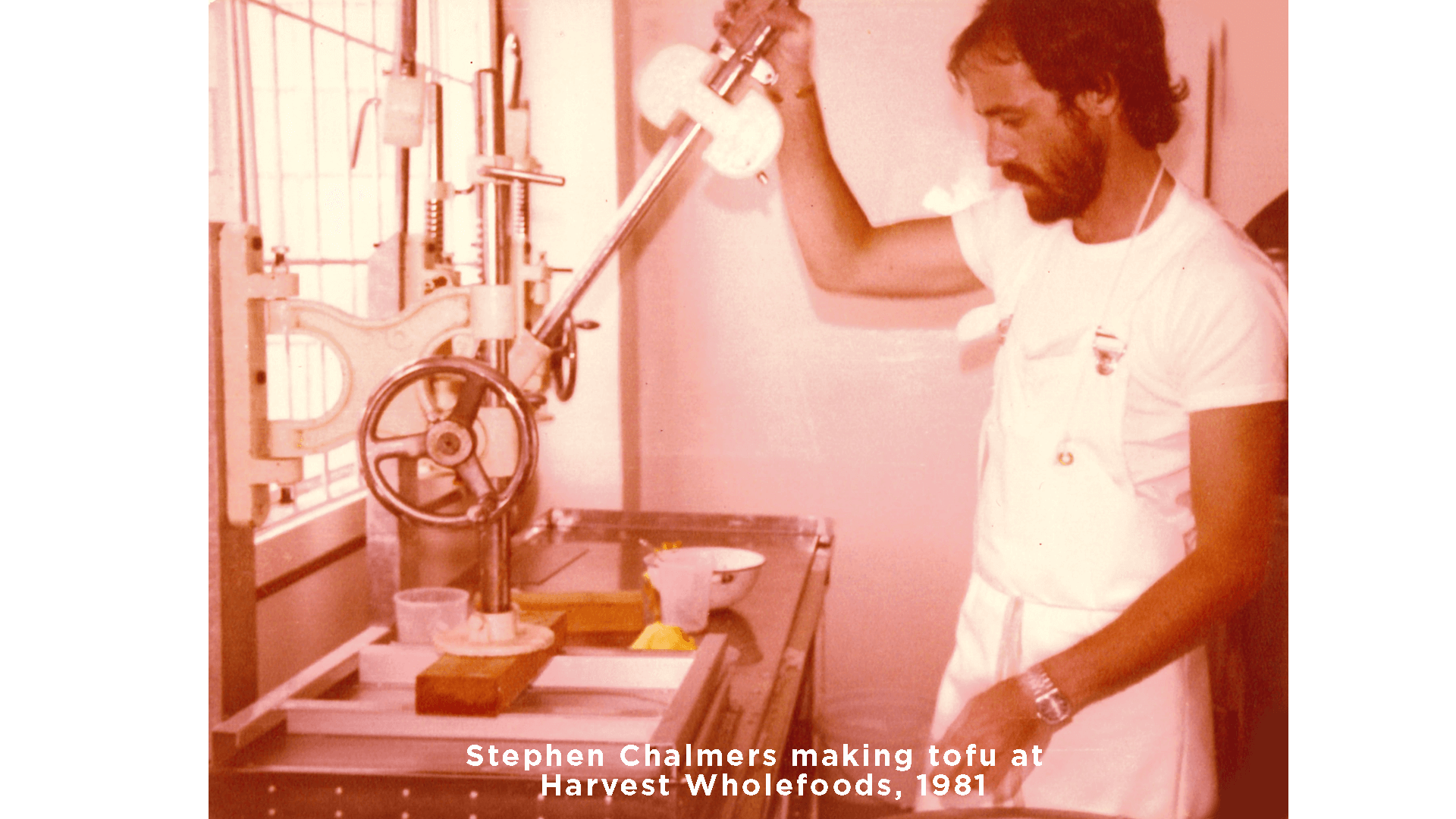 By this time, we were frantically busy and our 2nd child Jesse was on the way. The business was now worth something, so we took the plunge and decided to sell, to my sister Sally and her partner Larry. With the proceeds, we set up and imported tofu making machinery from Japan and created our first Soyfoods business; Harvest Soyfoods. During this time we made both tofu and tempeh and in those days a couple of tofu cottage spreads. Over the next couple of years, this grew and grew. By this time we all had young families and together with the business commitment, it was becoming too much. We decided once again to sell up and then pause to see what our next venture should be.

During this period we worked with a friend Austin Holden, for a couple of years who had a wholefood importing business in Glen Eden. His wholesale business was called Kaiora Naturals and he had a small shop in the corner of his warehouse that he called East West Wholefoods selling basically what he imported. We had planned at this stage to think what our next steps would be but decided to go for a more simple job while our children were very young. We sold Harvest Soy Foods to Trevor and Paul Johnson who renamed the business Bean Supreme.

Elizabeth’s Mum, Jean Fowler (aka Granny Jean ‘the Miso Queen’) had also had an illness called Polymyalgia Rheumatica. Before this point, she was taking a lot of cortisone (prednisone) to cope with neck pain and wore a neck brace. In conjunction again with Doctor John Hilton, she started to radically change her diet to a traditional Japanese one, in this case, tofu, rice and veggies every day! She slowly weaned herself off her medication, threw away the neck collar and at the age of 70 gained a new lease on life. It was also during this period that she started making miso at home, right from making the Koji starter through to the finished product, which we then sold in our new shop…….and so she got her name: ‘Granny Jean the Miso Queen’. 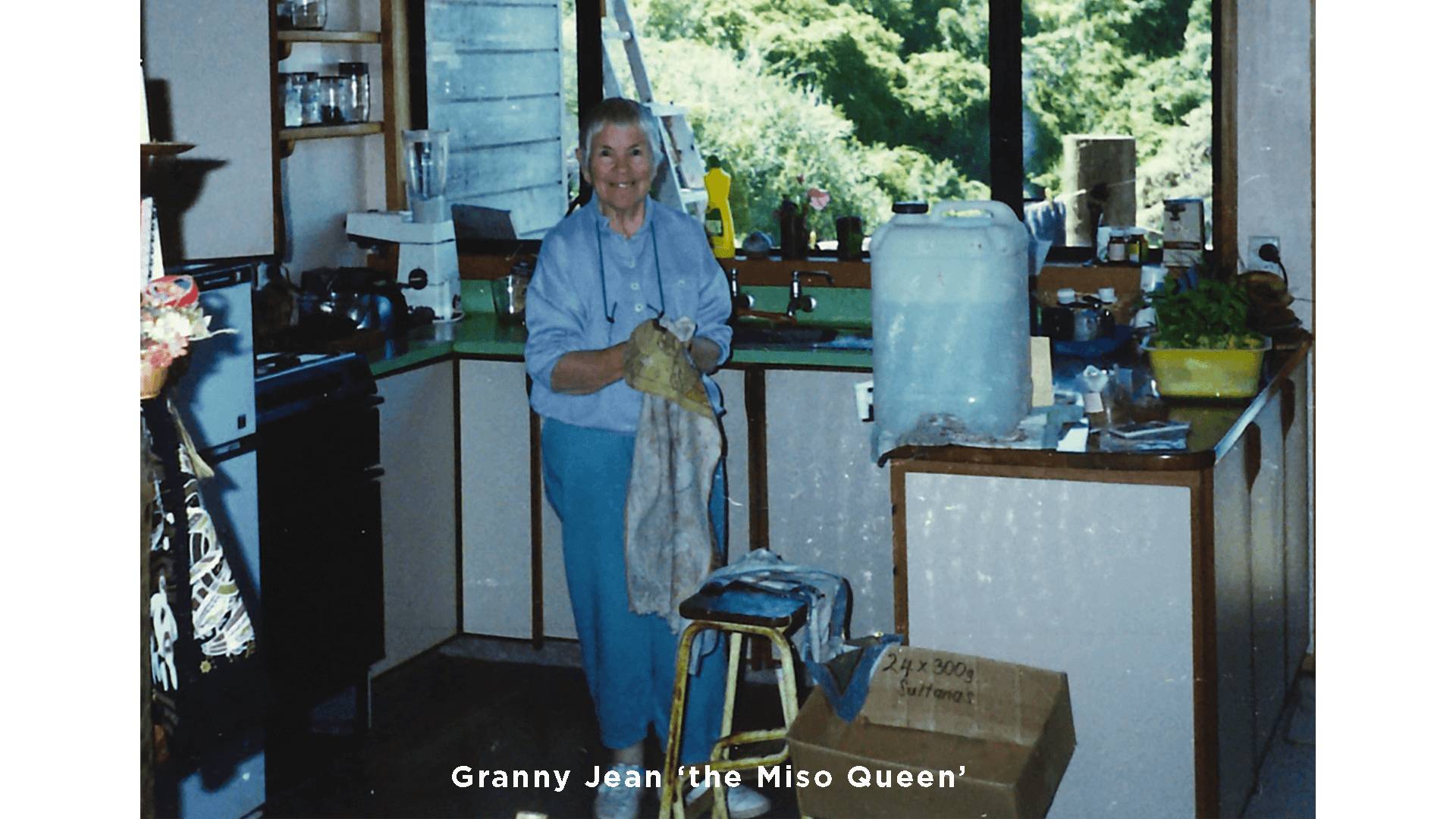 After 3 years of running a commercial cleaning business, we were very uninspired by what we were doing. We had started an Organic Food Co-op from our home in Titirangi and by this time Kaiora Naturals had moved into the city, so the little East West Wholefoods shop was all by itself in a huge warehouse. We negotiated to buy the shop from Austin changing its name to East West Organics specializing in organic fruit and veggies (bringing the Co-op down to the shop) along with the wholefoods, and of course Granny Jean’s miso! Over time the shop continued to grow and we expanded its size further and further into the warehouse.

A few years in, we decided that we wanted to sell organic tofu made with nigari, which is the natural coagulant that we preferred and had used previously. Nigari is more difficult to use commercially but creates a superior quality product. As we still had some of our previous equipment and the skills to make tofu, we started to make fresh tofu onsite to sell in our shop.

History does repeat! Other shops and many folks came from far and wide to buy our organic tofu. Before we knew what was happening we were working day and night to make enough tofu. In 1999 we once again decided that we needed to sell the shop to enable us to move to bigger premises and keep up with tofu demand. Again, we sold to sister Sally and her partner Larry. We initially called our new small manufacturing business The Organic Soy Company, and after a few years changed it to Chalmers Organics Limited to better reflect our family values and name.

In 1998 while making tofu at the back of East West Organics our son Daniel joined the business and later in our new premises in Henderson our daughter Jesse also joined us (2001). Both children were eventually made partners and we are all now directors and shareholders in the company, although Jesse and Daniel are now the only working members of the family co-managing the company. 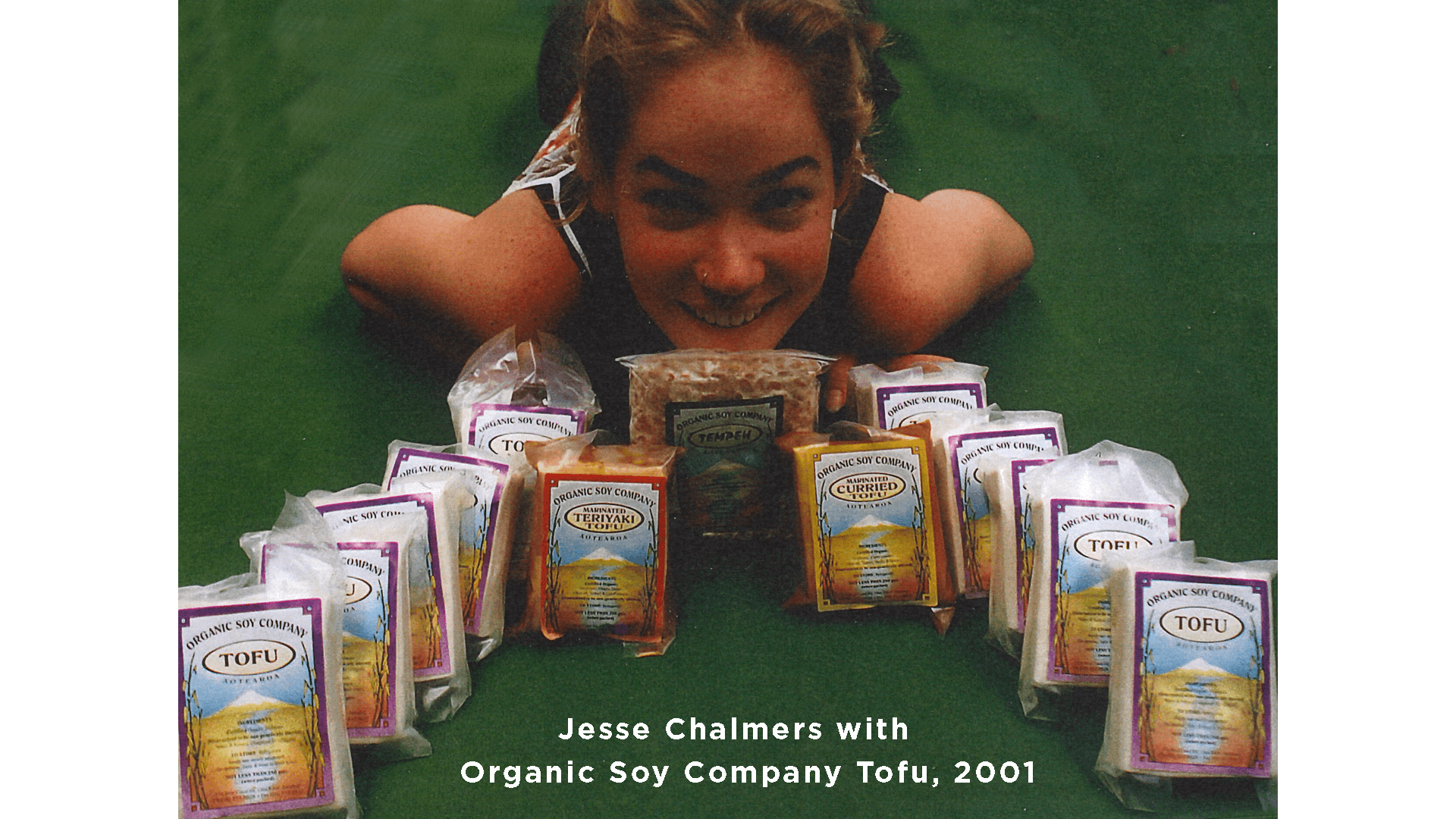 As a family, we have watched our business grow and grow, and the growth of the vegan/vegetarian food sector has been truly phenomenal. We are very concerned about climate change and have always tried to be as environmentally conscious as possible. Our Tonzu range is a growing range of lovingly handcrafted certified organic wholefoods and our Zenzo range was created to supply delicious dairy-free treats like cheeses and yoghurts.

From a little company of four we now employ over 30 staff, all on the Living Wage since 2014. Daniel directs the sales and marketing side of the business as well as new product development, and Jesse directs operations, finance and administration. Between the two of them, they have the whole business well directed. Both Stephen and I are now retired, but still active as Board members. As well as our combined mana and history in the industry, we both bring different strengths, Stephen his sales skills, and I, a background in finance. 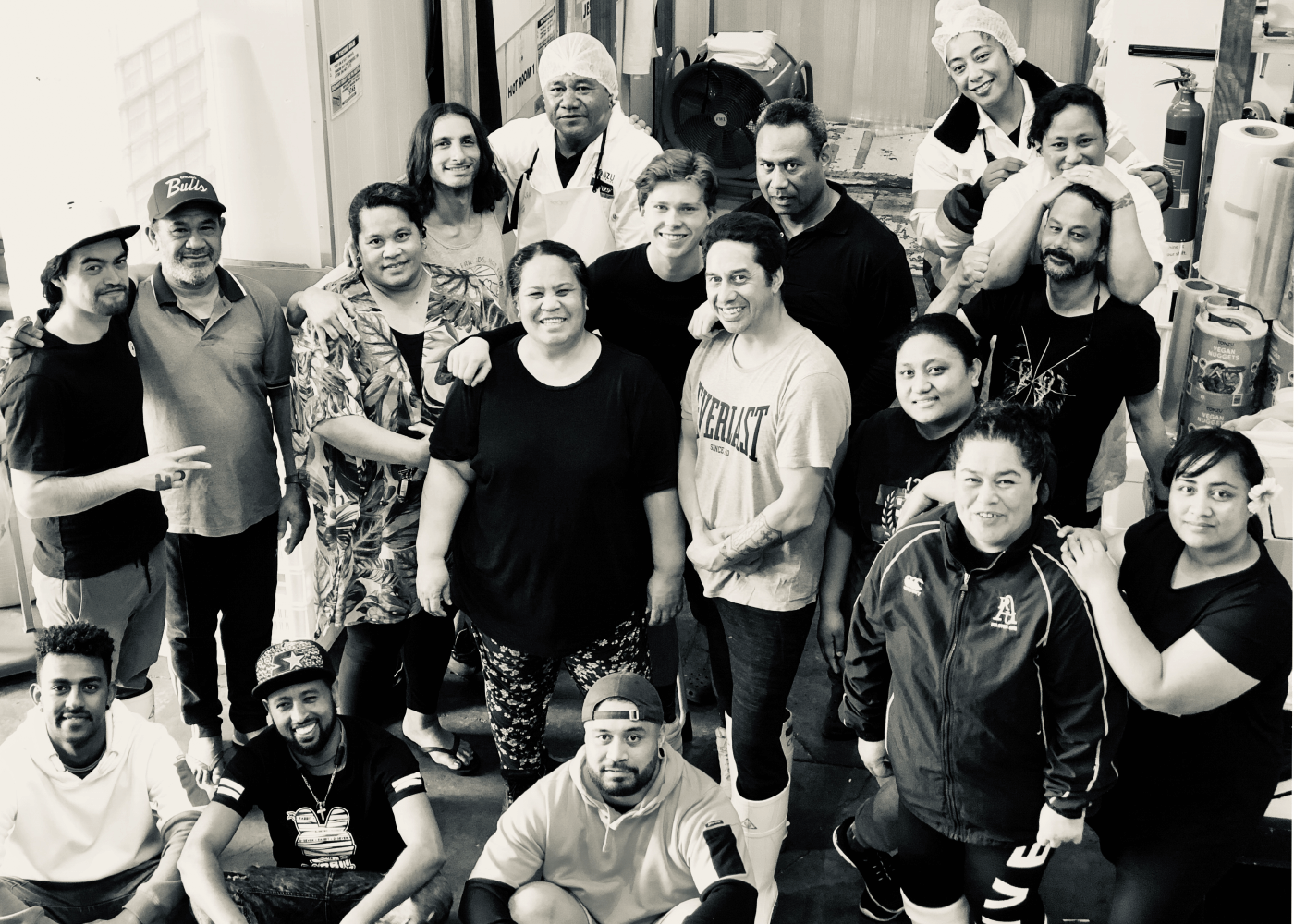